You may assume that in Japan, being a land surrounded by the sea, plenty of fish is eaten. Indeed, the Japanese eat lots of fish in many variations: baked, cooked, grilled, fried and last but not least raw. In addition, the Japanese island is very mountainous. The little land that can be used in an agricultural way serves for the cultivation of rice. These two facts make it logic that the combination of rice and raw fish is a very loved meal in Japan - Sushi. Among other things, the Japanese eat raw fish completely without any side dishes. This is called Sashimi.

Sushi are covered or filled bite-size portions of rice that is spiced with vinegar before. Mostly the tidbits are covered or filled with raw fish, but there are variations of Sushi with vegetables, eggs and many other things. In past times, the raw fish was made edible by using vinegared rice. This is the basis for the way of preparation today. Sushi exists in many shapes. The two best known and most popular shapes are Nigiri-zushi and Maki-zushi. Nigiri-zushi are formed out of rice by hand and covered with the fish. For making Maki-zushi, you spread out rice on a bamboo mat, cover it with the fish and roll it. Sushi usually serves as a full meal. 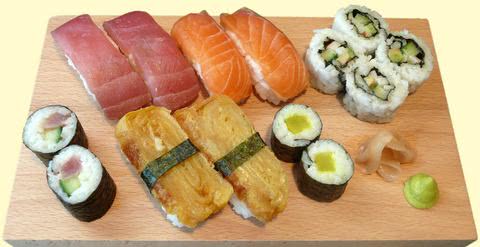 Sashimi is raw fish carved in thin slices. It is prepared elaborately and is eaten without any side dishes. Sashimi normally is a starter.

Japanese Sushi developed some hundred years ago by trying to prevent fresh fish from perishing. The real origin of this method however was not in Japan but in other South-East Asian regions. To preserve the fresh raw fish by using fermentation it was salted and pressed in layers of rice. A heavy stone was used as a weight to achieve the needed pressure. Fermented like this it was possible to eat the fish even months later. First the rice was thrown away, later on eaten together with the fish. This is the oldest form of Sushi existing today and is called Nare-zushi (なれ鮨).

Only in the middle of the seventeenth century the Japanese discovered that the fermentation of the ingredients could be accelerated by adding vinegar to the rice. This knowledge is the basis for all modern types of preparation where the stone as a weight is no more used.

Today like in former times there are mainly two styles of Sushi: The Kansai-style from Osaka situated in the region of Kansai, and the Edo-style from Tokyo.

The more popular type of preparation for Sushi developed around the region of Edo (the name of Tokyo until 1868). Just catched in the bay of Edo, slices of fresh fish were taken as cover for rice tidbits that were pressed and formed by hand. This kind of Sushi is called Nigiri-zushi (握り寿司) and today is spread throughout the whole world.

Less know than the Edo-style today is a form of preparation that developed in the region of Kansai around Osaka, the economic center of Japan. Therefore you press the fish together with the rice in a trough and afterwards cut it in pieces. You call this Oshi-zushi (押し寿司).

The first Kanji (letters from China, adopted by the Japanese in the 5th century) for Sushi already existed 200 to 300 years b. c. in China. The Japanese today use different versions. The composition of the Kanji for Su and the Kanji for Shi is about three fourths concerning its range of use. Both letters literally do not have any connection to Sushi, rice or fish but do mean "luck" and "to preside over":

In use frequently is as well an older Kanji for Sushi. The left side of the Kanji means "fish", the right side "delicious":

The Japanese own writing system Kana, consisting of its syllable writings Hiragana and Katakana, also knows corresponding letters for Sushi:

For more than one reason, Sushi is a very healthy meal:

To relish Sushi the traditional way, you will need the fitting accessories.

First there are the Hashi (箸), the Japanese chopsticks. You will find them in front of you on the table. While you do not use them, you lay them down parallel to the edge of the table. Together with the chopsticks comes a small ceramic bench, Hashi oki, where you put on the tops of the chopsticks. Also you will have a small ceramic dish to put in soy sauce later on. At the beginning of the Sushi-meal you will usually get a hot towel, an Oshibori, to wipe over your face and hands.

You can eat Sushi with your hands or the chopsticks. No matter how, in both cases you take the Sushi piece, usually a mouthful, and put it in the provided soy sauce. Take care just to dip the fish part in and not the rice that could fall apart (and this is said to be very indelicate). Besides, the rice absorbs the soy sauce too fast and this covers the fine taste of the fish completely. After dipping, the piece is eaten with one bite.

It is very impolite to point with the chopsticks at things, let alone persons.

While eating with chopsticks there may occur some misunderstandings in Japan. It is very impolite to point with the chopsticks at persons; also the passing on of a piece of Sushi from one chopstick to another will at least incur displeasure because this reminds of a Japanese tradition at funerals.

Traditionally you have green tea or Japanese rice wine with Sushi. But a beer or a glass of wine will also fit perfectly.

If you want to have green tea with Sushi, you can resort without hesitation to the common Japanese types like Bancha (番茶) or Sencha (煎茶). Their sweet flavor suits the raw fish very fine. To prepare the green tea you take about 1½ to 2 teaspoons of tea per cup. Bancha then is brewed per pot, Sencha per cup with boiling water.

Japanese rice wine is called Sake (お酒). It is made of fermented rice, malt and water. Sake has an alcoholic content of 16 % to 19 % and its taste varies from sweet to dry. You should store it in a dry and cool place. You may drink it warm or cold. When drinking rice wine to Sushi, you usually warm it up to body temperature.

How to drink Sake

Serve the guests by importance. Do not pour in your tumbler yourself but wait until your neighbor does it. Lift up the Sake tumbler if it is refilled. Raise your glass to the one who served you before you drink.

The ideal beginning for the Sushi pleasure is a soup. Possibly a clear stock, Suimono, or a Miso-soup Misoshiru (味噌汁), made of fermented soybean paste. In Japan soups are always served boiling hot and drunken out of a cup. You reduce the temperature by sipping to a bearable mark.