The preparation of Sushi needs as much creativity as craftsmanship. You will need a lot of exercise to learn the main techniques so that the Sushi taste excellent and furthermore look wonderful. Even if you will not succeed in the beginning - after enough attempts the rice will be pressed with the right pressure, the Nigiri-zushi will be oval and even and the Maki-zushi will be round instead of square.

In the first paragraph of this chapter you will find all needed knacks for the preparation of the additions like Wasabi, Gari or Goma. It continues with the right technique for cutting up fish and the important preparation of rice.

Afterwards the production of the different kinds of Sushi - Nigiri-zushi, Maki-zushi, Temaki-zushi, Chirashi-zushi - is described.

What to do first

I advise you to prepare some of the basic ingredients earlier so that the actual making of Sushi works smoothly.

Peel the four pieces of fresh ginger and cut into thin slices. Put it in boiling water for about one minute - not too long, otherwise it is losing its sharpness - and then strain into a sieve. Rinse with cold water and pat dry. Mix the ½ liter of vinegar with 350 g sugar and a teaspoon of salt, pour with one liter of boiling water. Let cool down the marinade and put the ginger for at least one day into it. Only take out before serving.

Peel the fresh Japanese horseradish and rub it into mush with a fine grater. Horseradish powder is stirred with water to a thick paste. Green horseradish out of a tube is ready to be used instantly.

The seaweed sheets gain taste if roasted. In doing so they also get less tenacious. It is best to pull the Nori briskly over a hot hotplate or open flame. Alternatively you can put the sheets into a hot stove for a moment. The roasted seaweed has a noticeably brighter color than the untreated sheets.

Nori is often sold particularly for making Sushi. These sheets are already roasted.

The very aromatic sesame seed gains taste by easily roasting as well. Containing much fat and oil, you can roast it in a pan without further fat. As soon as it turns golden-brown in color, you have to take it out of the pan immediately.

The Japanese distinguish between two methods to divide fish: sanmai oroshi cuts it into three parts, gomai oroshi into five parts. The second method is only suitable for flat or very big fishes. Being a possibility for us, the first method is described here.

While cutting fish, you should dip your knife briefly into a mixture of cold vinegar and water every second or third cut. Therefore the fat of the fish will not stick to your knife.

To get rid of the scales, take the fish by its end. Put the knife flat to the fish and scrape off the scales in direction to its head. Do not hold the fish by its body to maintain the stability of its flesh. While scraping, rub the fish with salted water from time to time.

Using this method, we have left three fish parts: One fillet left, one right and the skeleton.

Eel is best bought as fillet. You will only need to marinade and grill the eel as described in the following recipe.

For the marinade mix three parts rice wine with one part sugar. Cut the eel fillets into two or three pieces. Grill at first the skinned side, eventually the other side. Steam the pieces about 5 minutes over intense heat and spread on the marinade. While finally grilling the eel once more, spread marinade on.

In contrast to many other mussels that are only eaten at certain seasons, the Abalone may be eaten throughout the whole year. Make sure that the Abalone is alive just before you prepare it. It is the only way to use it raw for Sushi. If you touch the mussels's flesh and it contracts, you can be sure it is alive.

The suction foot of the Abalone is the eatable part. Detach it from the shell and clean it with a brush and much salt. Rinse it off with running water. Take a sharp knife and remove the dark edges around the flesh. In the following, cut the suction foot in angular slices.

I advise you to rub your hands and the squid again an again with salt to make it skid-proof. The raw pieces of squid are very firm to bite. Therefore cut the slices with a sharp knife in a rhombic way.

The size of the shrimps for Sushi should be about 5 to 6 centimeters without head. First we remove the heads of the shrimps and wash the bodies off very thoroughly. Detach the intestines and spear the shrimp between shell and joint on a small skewer so that it remains straight when cooking. Boil water in a pot and put the shrimps in. The shrimps are done if they rise to the surface. Rinse with ice-cold water immediately and detach the skewers. Remove shell from around body, but not tail. Cut the shrimps open along belly only going halfway in. Open out and flatten the shrimps with your fingers.

The rice concerning Sushi has a completely special meaning and therefore its preparation, too. The well-done Sushi rice should be sticking easily so that you can form small bites that do not fall apart immediately. On the other hand, the rice should melt in one's mouth without having to be crushed, or worse, bitten to pieces.

The best way to reach this is to prepare Sushi rice traditionally: We steam the rice, blend it afterwards with spiced vinegar and cool it down as fast as possible to body temperature.

Begin about one hour before you want to cook the rice with washing it. Put cold water in a bowl and add the rice. By stirring, any residues come off the rice corns. Pour off the clouded water and replace it with fresh water. Repeat this procedure until the water comes clear. Subsequently, pour off the water and let drain and rest the rice at least half an hour. 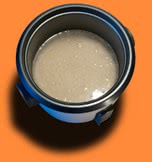 Now we need a pot with a tight-fitting lid. Put the washed rice together with water and a Kombu-stripe in the pot and bring it with closed lid to the boil over a medium heat. For one cup of rice use about one and one fifth cup of water. Remove the seaweed just before the boiling point. As soon as the rice is cooking, let simmer and steam the rice for about 10 minutes. During the whole procedure you should not lift the lid of the pot.

Meanwhile you can prepare the spiced vinegar. A good basis for spiced vinegar is the following recipe. It is sufficient for approximately five cups uncooked rice.

Stir all ingredients as long as salt and sugar have dissolved. To adapt the spiced vinegar to your own taste, it is best to change the amount of sugar.

When the rice was steaming for about 10 minutes, take the pot and leave the rice untouched for another 10 minutes, still with closed cover, without heat. 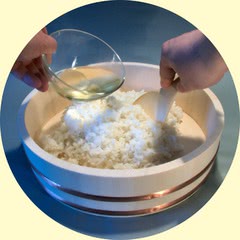 The rice is ready after 25 minutes altogether and should be mixed with the spiced vinegar immediately. Therefore fill the cooked rice into a flat wooden bowl. Add the prepared spiced vinegar and blend with a wooden spatula.

In order to obtain the cooling of the rice as fast as possible you need to cool it with a fan during seasoning.

For Nigiri-zushi, form the rice by hand to a small oval dumpling, spread on Wasabi and put on fish. It is particularly important to pay attention that the quantity of fish and rice is well balanced.

You need rice, fish and Wasabi; furthermore a chopping board and a sharp knife. Have a bowl of a mixture of vinegar and cold water ready.

Now you can form the Nigiri-zushi:

During this procedure, it all depends on the facts that you do not form the rice too firmly and not hold the fish too long in your hand. 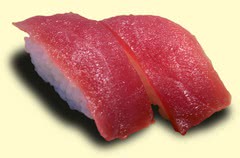 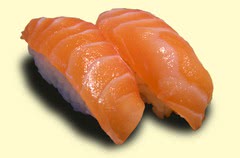 Nigiri-zushi are always served in pairs.

The Gunkan style makes it possible to prepare Nigiri-zushi with a filling like sea urchin, various sorts of mussels or fish roe. Therefore you wind a stripe of seaweed round the rice dumpling. The so created cup is stuffed with the filling: 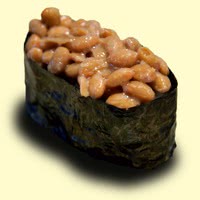 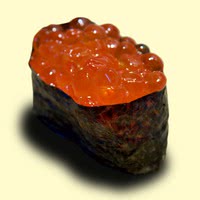 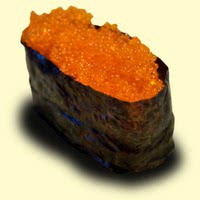 For preparing Maki-zushi you need the bamboo mat, the chopping board and a sharp knife. The ingredients are rice, stuffing, seaweed and Wasabi.

First roast the seaweed sheets from one side and afterwards cut it into half. Cut the ingredients for the stuffing in strips. Now you can form the Maki-zushi:

Cut the finished roll with a sharp knife into six or eight equal parts. Therefore cut the roll in half, put the halves side by side and cut them again two or three times.

For cutting the Maki-zushi I advise you to dip the knife into a mixture of vinegar and cold water before each cut.

Arrange the Maki-zushi on front side, having the smooth side at the top.

This special kind of Maki-zushi is formed like this that the rice sticks outside the seaweed sheet. Therefore spread the rice like described over the seaweed sheet. Then turn the covered seaweed sheet upside down. It is necessary to protect the bamboo mat against the sticky rice by using a cling film. After stuffing and rolling you can carefully remove the cling film. FIXME: Für einen tollen zusätzlichen Geschmack können wir die Ura-Maki noch in geröstetem Sesam oder in Fliegenfischrogen rollen. 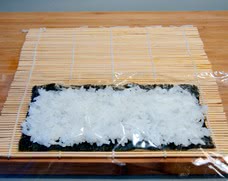 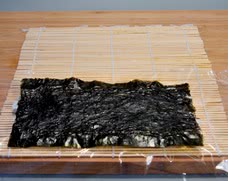 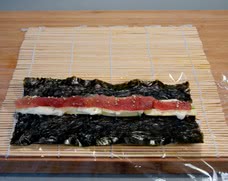 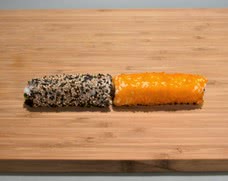 There are other kinds of Sushi apart from the well-known and traditional Nigiri-zushi and Maki-zushi:

These hand-rolled Sushi are very well suited for the self-preparation at the table. Therefore you prepare the rice and make seaweed, Wasabi and various ingredients for the stuffing available.

While eating, every one makes his own Sushi. Take a half-sized seaweed sheet and spread half a spoon of rice on it. Put a stuffing of your own choice in the middle. After spreading some Wasabi on, roll the seaweed carefully to a cone.

Temaki-zushi should be eaten immediately. Otherwise the seaweed sheet becomes soggy and the Sushi might fall apart. 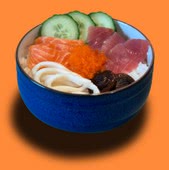 The easiest form of Sushi is Chirashi-zushi: mixed ingredients on top of a bowl of rice. No matter where you eat it, the taste will always be totally different because there are at least as many variations of Chirashi-zushi as there are people preparing it.

One possible variation is: two slices of tuna, salmon and swordfish, two pieces of squid (cooked), one prawn, a piece of omelet, three slices of cucumber, one shiitake mushroom. Prepare ingredients on top of a bowl of rice decoratively.